Wayne Jackson
There is much confusion in the community of “Christendom” as to what constitutes “conversion.” There need not be. A collective consideration of those cases in the book of Acts wonderfully clarifies the matter. Study this theme with us.

There are many disciplines of human learning that are governed by rules. For example, there are mathematics rules, rules that govern grammar, etc.

It is not uncommon, though, that rules are structured in technical terms that, practically speaking, are of little value to some students. Hence, a wise teacher learns to illustrate. The “rule” is made more understandable by the use of “examples.”

In math, for instance: “The multiplier times the multiplicand yields the product.” Or, to say the same thing in an illustrative fashion, two times two equals four.

In grammar, the rule says: “A subject and predicate must agree in number.” "Bob and Jane are — not “is” — friends." The compound subject requires a plural predicate.

The Bible is the greatest book of instruction known to humanity. It contains specific laws and commands; it also amply illustrates those requirements with clear examples of application, along with reinforcements of pledged reward or punishment as circumstances may warrant. The rule-and-example principle in secular education may be illustrated with reference to God’s marvelous plan of salvation for sinners.

Before Christ ascended into heaven following his death, he gave to his disciples a charge that is designated commonly as “the great commission.” It is found in three forms that are not precisely parallel in format, but certainly are complementary when taken together.

Matthew’s record contains the admonition to “make disciples of all the nations, immersing them into the name of the Father, the Son, and the Holy Spirit” (see 28:18-20). “Into the name of” is an expression signifying ownership (Danker, 713).

Mark simply has it, “preach the gospel to the whole creation. He who believes and is immersed shall be saved; but he who disbelieves shall be condemned” (16:15-16).

Luke’s version is more condensed yet. It merely states that “repentance and remission of sins should be preached in his name to all the nations” (24:47).

A synthesis of these texts leads to the general conclusion that the following obligations are essential to gospel obedience:

While this should be incredibly easy to understand, numerous sincere people, whose minds have been distracted by misguided teachers, seem not to grasp the truth relative to what is required to enjoy salvation. It is not without significance, therefore, that there are clear examples in the book of Acts that, when taken in concert, clearly illustrate the “rules” laid down by the “Great Commission.”

The New Testament student must first consider the fact that the terms of salvation are equivalent for all people. Jude called it a “common salvation” (v. 3), and Peter argued that there is “no distinction” between Jews and Gentiles in terms of what is required for the “cleansing” from the contamination of sin (Acts 11:12; 15:9).

When, therefore, one examines the cases of conversion in the book of Acts, he will see that some terms are explicitly stated, while others are necessarily implied. This is a tremendously important principle of interpretation.

Within this framework of reference, let us consider the examples of conversion in Luke’s treatise regarding the establishment and expansion of the early church.

The Jews on Pentecost (Acts 2)

In Acts 2 there is the record of the conversion of the Jews on the day of Pentecost. Luke specifies that Peter (together with the other apostles) “spoke” the message of Christ to those assembled.

They listened carefully to the information, and cried out: “What shall we do?”

The reply was: “Repent, and be immersed every one of you in the name of Jesus Christ to obtain the forgiveness of your sins” (v. 38). Note that they were not instructed to “believe,” for their question, “what shall we do?”, necessarily implied they believed already.

And so, two conditions are explicitly stated — repentance and immersion; another is quite clearly implied.

When the church in Jerusalem was scattered, as a result of persecution, an evangelist named Philip went to Samaria and “proclaimed” Christ (8:5). Many “gave heed” to his preaching; they believed and were immersed, both men and women (v. 12).

It is not explicitly stated that they repented of their sins, but one is forced to conclude that they did, for elsewhere ones learns that repentance is required (as shown above).

Luke informs us that “Simon,” formerly a notorious sorcerer, “also believed” and was “immersed” (v. 13). It will not do to argue, as some have done, that Simon was not genuinely converted, for the term “also” shows that he did exactly what the other Samaritans did. That he sinned subsequently did not nullify the process involved in his initial conversion.

While returning from Jerusalem to worship, a Jewish man (either by birth or proselytization) from Ethiopia was approached by Philip, an evangelist sent by God (8:26ff). Reading from Isaiah 53, the treasurer was enthralled with the story of One who died for the sins of others. He wanted to know the identity of this person.

Philip explained to the man that the prophetic fulfillment centered in Jesus Christ. Quite obviously the plan of salvation was presented as well, for as they passed a stream of water, the gentleman exclaimed: “Look, here is water; what hinders me from being immersed?”

Because of a textual variation, verse 37 is omitted from most modern versions (though see NKJV). While the text base may not be the strongest for the treasurer’s confession of faith in Christ, it does reflect the sentiments of Matthew 10:32; Romans 10:9-10; 1 Timothy 6:12, and certainly is implied, if not stated explicitly. Philip must have had some indication of the man’s penitent faith; otherwise he would not have immersed him.

By divine design the conversion of Saul of Tarsus is recorded three times in the book of Acts (chapters 9, 22, 26). Saul received a vision of the resurrected Christ while en route to Damascus. The Lord told him to enter the city, and he would be “told” what he “must do” (9:6; cf. 22:10).

The fact that Saul was not “disobedient” to the Savior’s instruction (26:19) was evidence of his faith, and his three days of prayer and fasting (9:9, 11) reflected a penitent disposition, though neither his faith nor his repentance are mentioned specifically.

The preacher, Ananias, commanded him to be immersed in order to wash away his sins (9:18; 22:16). None of the three narratives records all of the conditions of salvation, but in concert they wonderfully supplement one another.

Cornelius, a Roman soldier, was the first Gentile to whom the gospel was proclaimed. After a series of supernatural events, Peter arrived at the centurion’s home in Caesarea, where he, his family, and near friends were gathered to “hear” the apostle’s message (vv. 22, 33). The eager audience was informed about Jesus Christ, and the need to believe in him (v. 43).

In his subsequent report to the Jews at Jerusalem regarding this event, Peter indicates the Gentiles were required to repent of their sins (11:18), and of course immersion was specifically commanded (10:48). Thus teaching, faith, repentance, and immersion all were involved.

On his second missionary campaign, Paul and his companions arrived at the city of Philippi. They went down to a river on the Sabbath where some Jewish women were convened. One of these was Lydia.

The Christian men taught these women, and the ladies gladly listened. They “gave heed” to the instruction of Paul and his fellows (suggesting they believed the message), and Lydia’s entire household was immersed. Lydia’s “faithfulness” was confirmed by the brothers’ willingness to accept her hospitality.

Did she repent of her sins, and openly acknowledge her faith in Christ? Who could possibly deny it?

Paul and Silas encountered opposition in Philippi, were thrown into prison, and beaten with many stripes. But God initiated a “great earthquake,” the prison doors were opened and everyone’s shackles were loosed. The jailor was on the point of committing suicide when Paul stopped him, assuring him that no one had escaped.

The jailor begged to know what he must “do” to be saved and Paul supplied him with the necessary gospel information to generate “belief” in the gentleman’s heart. Paul and Silas then “spoke the word of the Lord” to his entire household.

The Philippian official realized his wrong in abusing these Christian men and, as a manifestation of repentance, washed their stripes. The entire family was immediately immersed into Christ (v. 33). Significantly, Luke sums up the entire conversion process by the phrase, “having believed in God” (v. 34).

Liberal writers contend that Paul’s ministry in Athens was a failure. Not so, however; it has blessed many across the centuries. In addition, Luke tells us that while some of the Greeks mocked the teaching, "certain men joined [stuck to, i.e., became associated with] Paul and “believed” (v. 34), two of whom are mentioned by name.

In view of the comprehensive way in which “believe” is frequently employed in Acts, one can only conclude that these folks became Christians — with all that such involved. We have discussed this elsewhere in greater detail (see The Acts of the Apostles from Jerusalem to Rome).

When Paul came to Corinth in Greece, again he encountered opposition. But persecution did not neuter the success of the gospel. For instance, Crispus believed and was immersed, and so was Gaius (cf. 1 Corinthians 1:14). In fact, “many of the Corinthians hearing, believed, and were immersed” (v. 8).

Though not stated here, it also is clear that these saints understood the nature and necessity of repentance (see 2 Corinthians 7:9-10).

When Paul arrived in Ephesus, he discovered twelve sincere men who had been immersed after the order of that which prevailed in the days of John the Immerser. Of course that system was obsolete at this point, and the apostle soon concluded that these gentlemen had been lacking in sufficient teaching regarding the redemptive mission of Christ.

Accordingly, Paul expanded their body of information; likewise their belief (v. 2a) was corrected, and they were immersed into Christ (v. 5).

A survey and systematic organization of these eleven cases of conversion will reveal these interesting facts.

Thus, in 30 instances a specific condition is stated, while in 25 requirements necessarily are implied. The Chart below will illustrate this in an easy-to-grasp fashion. 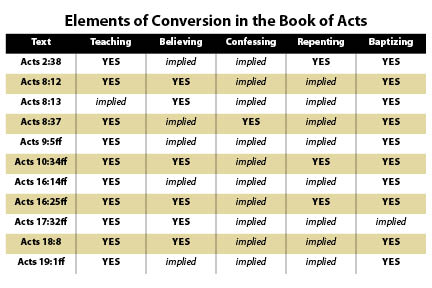 You may download the chart displayed above in 3×5 chart and 4×6 chart pdf sizes.

Is it not perfectly clear that responsible exegesis may not simply focus upon one condition of salvation, e.g., “faith,” to the exclusion of others, and contend that salvation is “by faith alone”? Yet this is the common mantra of the Protestant world. It is terribly wrong.

When the information contained in the “Great Commission” is combined with the striking examples in the book of Acts (i.e., the rule is illustrated by approved apostolic examples), it becomes impossible for the honest student not to recognize that in the first century men and women who sought to follow Christ were required to:

Anything short of this does not result in salvation.

Sources
More Articles Like This One
A Dispute About the Purpose of Baptism
Back to Biblical Kindergarten
What Must I Know To Be Saved?
Belief as Used in the Book of Acts
What Is Faith in Christ?
Examine Yourselves!
Paul’s First Recorded Sermon
The Conversion of Saul of Tarsus
A Divine Platform for Christian Unity
A Perversion of Biblical Faith